On June 7, 2021, Monessa “Siren” Balzhiser took flight as Lockheed Martin’s first female F-35 Production and Training Pilot. The former United States Air Force F-16 pilot joins the ranks of an elite group of female F-35 pilots that have paved the way before her. 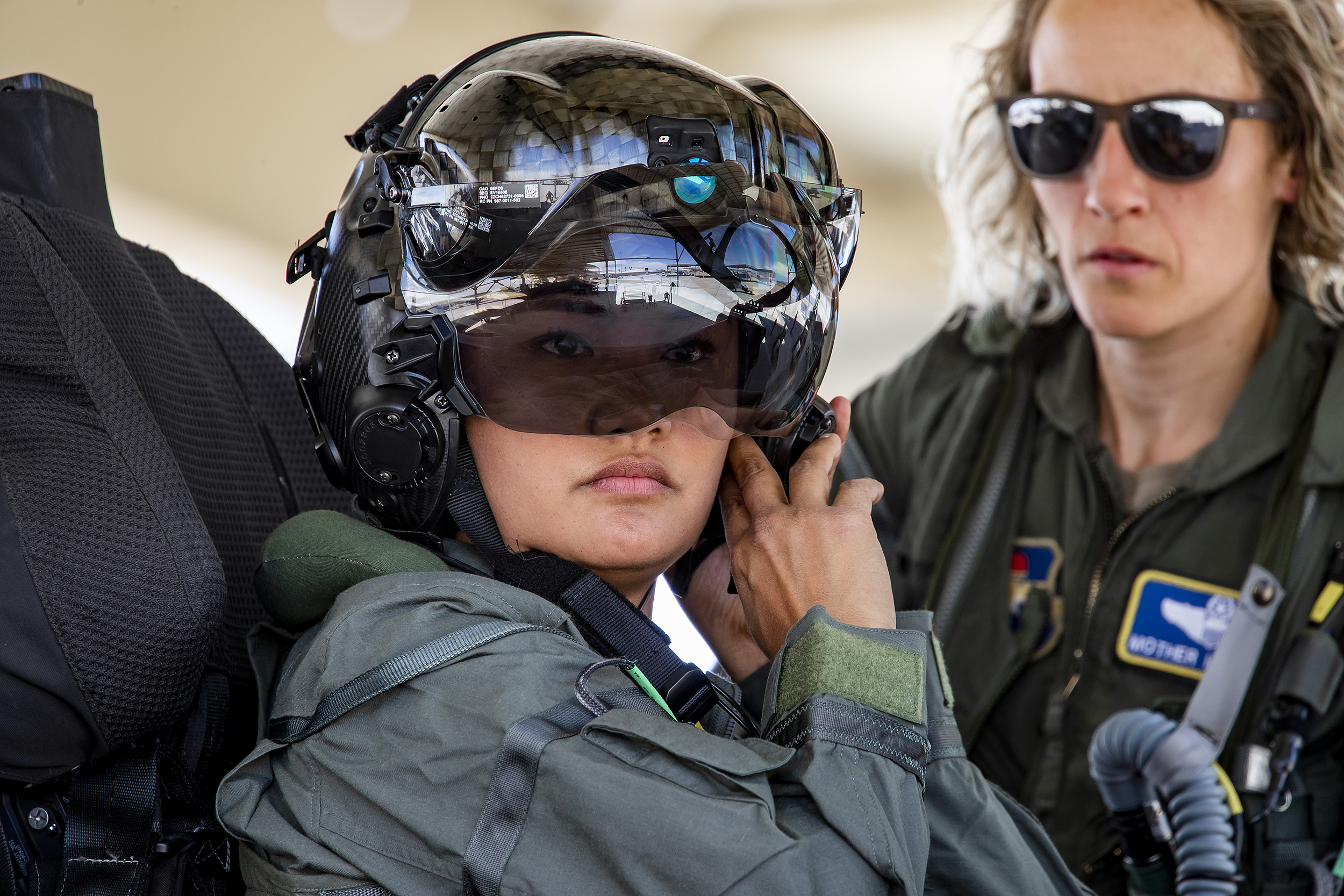 Balzhiser joined Lockheed Martin in 2018 and was eventually selected to fly the F-16 as a production and training pilot. When Balzhiser was asked if she was interested in flying the F-35, she initially thought it was a joke, but once the shock and humor subsided, she immediately agreed to take on the challenge of flying the world’s most advanced 5th Generation fighter aircraft.

“I’m absolutely humbled and honored to represent Lockheed Martin and fly the F-16 and the F-35, two of the best fighter jets out there,” she said. “It was a little bit shocking at first, but once I settled down, I was in awe—I’m still in awe.”

Balzhiser took her very first flight in the F-35 at Luke Air Force with her mentor and F-35 flight instructor, Lt. Col. Kristin “Mother” Hubbard, flying as her wingman.

While the number of female F-35 pilots in the community is steadily growing, there is still the misconception that flying fighters is not accessible to women in the industry. Christine Mau, the very first woman to ever fly the F-35 once said, “flying is the ultimate equalizer.”

“The jet really doesn’t know if a pilot is male or female—it doesn’t. It just expects you to perform the way you need to,” said Balzhiser. “Many people don’t realize that females are doing this in the industry—we’re doing it out in the operational world of the fighter communities.”

A Flight to Remember

“It was amazing and a bit surreal,” she said. “If you can imagine every emotion that you can think of happening in one location—nervousness when stepping out to the jet, to the pure excitement of being strapped into one of the most powerful fighter jets in the world, to scared of messing up, to a huge adrenaline rush—it was just all encompassed in my one little glass cockpit.”

One of the biggest differences between learning to fly the F-35 and F-16 is that a pilot’s first flight in the F-35 is truly solo. In preparation for her first flight, Balzhiser spent the six-weeks prior with the 56th Training Squadron and 61st Fighter Squadron as part of a Senior Officer Course. The training consisted of rigorous amounts of academics for each system on the F-35 and 12 simulator scenarios.

Balzhiser and her classmates not only had to demonstrate their ability to identify and respond to any kind of situation requiring emergency procedures, but also how to handle all the sensor capabilities in the F-35. All the academics and simulation training eventually culminated into a check ride in the simulator from a squadron evaluation pilot. Once Balzhiser passed her check ride, she was cleared for take-off.

“My initial thought once I took off of the ground was, in one word, “WHOA.” The biggest transition that I am still getting used to in the jet is how smart the F-35 is—Its ability to engage and disseminate the information that it’s gathering and then display it back to the pilot – it takes a lot of focus and multitasking ability.  With my background in the F-16 and the number of flying hours that I had, flying the F-35 came naturally.  It is extremely easy to fly.” she said. 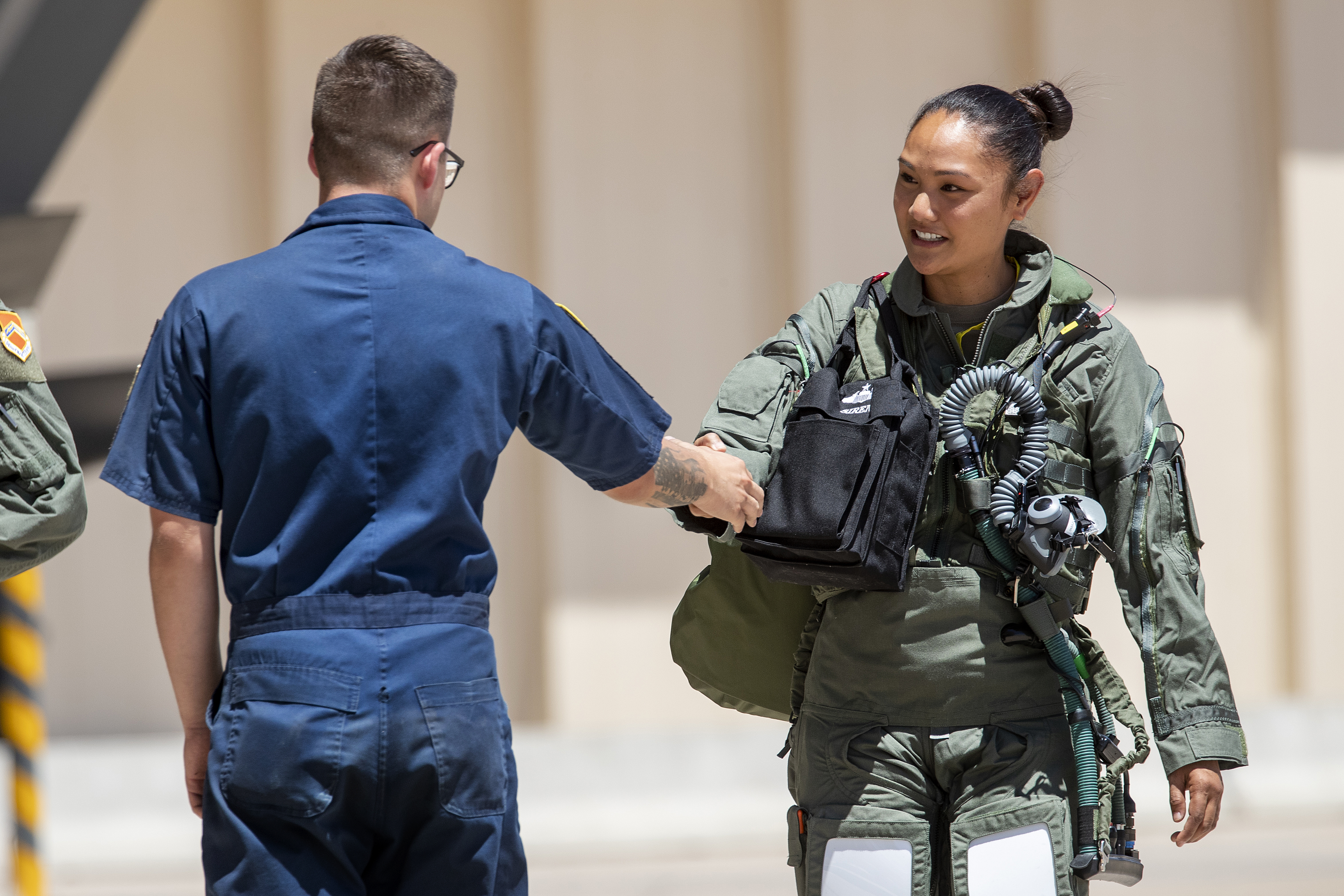 After landing, Balzhiser was greeted back on the ground by her family, colleagues and friends.

“Having my family there for such an incredible milestone was extremely touching for me. I didn’t realize how awesome and cool (as my daughter would explain it) the day was until I got home. Everything was just go-go-go until that point,” she said. “In the end, it was surreal and an amazing experience.”

“Honestly, I could not be happier being a fighter pilot and now flying the F-35. It’s a dream come true for me.”