F-35: An Economic and Skills Engine for the UK

For nearly 80 years, the United Kingdom and United States have shared a “special relationship” – a partnership rooted in shared values, shared history, and shared interests. No programme better exemplifies this relationship than the F-35.

Before the F-35 even took its first flight, the United Kingdom had signed on as a key partner – the only international partner to be designated “Tier One”, having been involved in development activities since at least 1985. This Tier One partnership means that the U.K. had exclusive influence on the design of the aircraft and will build 15% by value of all the 3,000-plus F-35 aircraft produced. This work on the F-35 programme generates significant economic growth for the U.K.

In 2020, Lockheed Martin commissioned KPMG to conduct a study to understand better just how large the economic impact of the F-35 programme is in the U.K. Findings from the study estimate £40.6 billion in gross value added (GVA) for the U.K. economy and more than 20,000 jobs over the time period from 2007 to 2038.

For every £1 of GVA generated from activity through the programme, an additional £326 is generated through wider economic activity. The study also found that the jobs created by the programme are more productive than others – they have an average GVA of £88,049, which is more than the averages for both the defence sector and national full-time employment. The largest share of these jobs is concentrated in the North West.  The jobs have been supported by £3.6 billion of knowledge transfer and training, including in stealth technologies and digital manufacturing, and a capital investment programme worth over £600 million.

“When you think of more than 20,000 jobs created – that’s a large number of workers who are then going out into the economy and spending the money they’ve earned,” said Adam Clink, Lockheed Martin U.K.’s Head of Carrier Strike. Clink formerly served in the Royal Navy as a pilot and later as Deputy Commander of the U.K.’s F-35 Lightning Force.

“The investments made, the jobs created – all of these aspects of the F-35 programme make it an absolute engine for economic growth,” Clink explained.

The majority of the GVA from the F-35 programme – approximately 43% – is concentrated in the North West of England. Another 10% will benefit the South East of England, and 9% both in the South West of England and in London. The remaining 29% of total GVA will be generated across the other eight regions of the U.K.

The F-35 programme will drive economic growth for the U.K. for decades to come, supporting the levelling-up agenda and sustaining a highly skilled sector and workforce. The F-35 will be in production until at least 2046 and in service until at least 2070, which will present even more opportunities for the U.K. in the future. 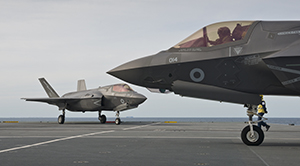 F-35: An Economic and Skills Engine for the UK
For nearly 80 years, the United Kingdom and United States have shared a “special relationship” – a partnership rooted in shared values, shared history, and shared interests. No programme better exemplifies this relationship than the F-35.
Read More 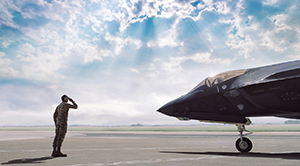 Five Ways F-35 Training is Improving Mission Readiness for Pilots and Maintainers
We’re creating an even better experience for pilots and maintainers to fly and sustain the jet.
Read More